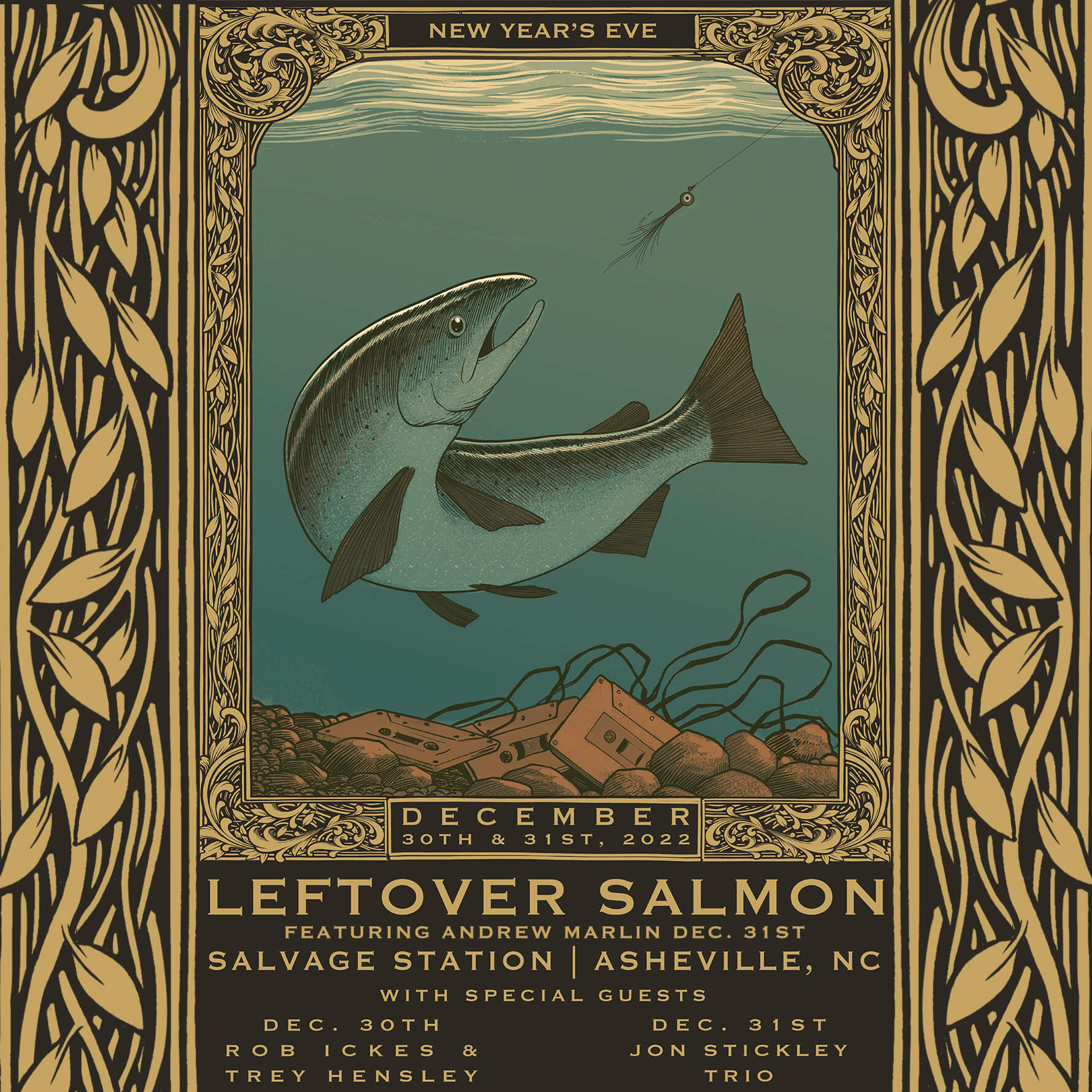 Let’s ring in the New Year together with a special TWO-NIGHT celebration of amazing live music, great food & drinks, and all of your friends at Salvage Station! We’ve got a lineup you don’t want to miss! Friday night, December 30th, we’ll have Leftover Salmon performing *TWO SETS* with support from very special guests Rob Ickes and Trey Hensley — LIVE on the Indoor Stage!

If you’re feeling like one night just isn’t enough, join us for New Year’s Eve (December 31st) for the second Leftover Salmon show featuring Andrew Marlin (of Watchhouse, formerly Mandolin Orange). Did we mention a complimentary champagne toast at midnight with all of your favorite people?! Yes, that is included in the ticket price for Saturday night!

Doors open at 7pm and the music starts at 8pm both nights. This is a General Admission, 21+ only event (no exceptions!)

Root Down will be serving their delicious twist on Southern Soul food and there will also be MULTIPLE full bars open for you to enjoy!

Check out our FAQ page here to learn about event parking options, what you can and cannot bring inside the venue, and MORE!

Few bands stick around for thirty years. Even fewer bands leave a legacy during that time that marks them as a truly special, once-in-lifetime type band. And no band has done all that and had as much fun as Leftover Salmon. Since their earliest days as a forward thinking, progressive bluegrass band who had the guts to add drums to the mix and who was unafraid to stir in any number of highly combustible styles into their ever evolving sound, to their role as a pioneer of the modern jamband scene, to their current status as elder-statesmen of the scene who cast a huge influential shadow over every festival they play, Leftover Salmon has been a crucial link in keeping alive the traditional music of the past while at the same time pushing that sound forward with their own weirdly, unique style.

As Leftover Salmon nears their 30th year, their inspiring story is set to be told in a brand new book, Leftover Salmon: Thirty Years of Festival! that was released in February 2019 by Rowman & Littlefield. In this book, critically acclaimed author of Bluegrass in Baltimore: The Hard Drivin’ Sound & Its Legacy, Tim Newby presents an intimate portrait of Leftover Salmon through the personal recollections of its band members, family, friends, former band-mates, managers, and the countless musicians they have influenced. Leftover Salmon: Thirty Years of Festival! is a thorough guide covering a thirty-year journey of a truly remarkable band. It is a tale of friendships and losses, musical discoveries and Wild West adventures, and the brethren they surround themselves with who fortify Salmon’s unique voice. Their story is one of tragedy and rebirth, of unimaginable highs and crushing lows, of friendships, of music, but most importantly it is the story of a special band and those that have lived through it all to create, inspire and have everlasting fun.

Heading into their fourth decade Leftover Salmon is showing no signs of slowing down as they are coming off the release of their most recent album, Something Higher (released in 2018) which has been universally hailed as one of the band’s finest releases. Something Higher shows how even upon preparing to enter their fourth-decade Leftover Salmon is proving it possible to recreate themselves without changing who they are. The band now features a line-up that has been together longer than any other in Salmon history and is one of the strongest the legendary band has ever assembled. Built around the core of founding members Drew Emmitt and Vince Herman, the band is now powered by banjo-wiz Andy Thorn and driven by the steady rhythm section of bassist Greg Garrison, drummer Alwyn Robinson, and keyboardist Erik Deutsch. The new line-up is continuing the long, storied history of Salmon which found them first emerging from the progressive bluegrass world and coming of age as one of the original jam bands, before rising to become architects of what has become known as Jamgrass and helping to create a landscape where bands schooled in the traditional rules of bluegrass can break free of those bonds through nontraditional instrumentation and an innate ability to push songs in new psychedelic directions live. Salmon is a band that over its thirty-year career has never stood still; they are constantly changing, evolving, and inspiring. If someone wanted to understand what Americana music is they could do no better than to go to a Leftover Salmon show, where they effortlessly glide from a bluegrass number born on the front porch, to the down-and-dirty Cajun swamps with a stop on Bourbon Street in New Orleans, to the hallowed halls of the Ryman in Nashville, before firing one up in the mountains of Colorado.